The following updates are for Raid Shadow Legends Current Version: 4.10:

Good tidings to ye all!

The Holidays are upon us, and here at Plarium we wanted to bring you a small update before the seasons kicks off. Here’s what you can expect:

The one and only, Sir Nicholas, whose cold fury turns any villain’s blood to ice in their veins

To further spread tidings of comfort and joy, we have given our players an option to activate a special Holiday Skin in their Bastion. Do so to decorate it for the upcoming Holidays!

Damage value based on [Enemy MAX HP] dealt by Common, Uncommon, and Rare Champions to Clan Boss has been decreased.

Sorry for the delay in this announce.

Update 0.13 is live now! And the biggest addition is, of course, one that was among the most requested features - Clans! From now on, players can create powerful Clans, battle challenges together, and advance through the ranks of the Clan Rankings to prove their might. And there are plenty of other innovations and changes aimed at bettering your experience in Raid: Shadow Legends. You can find a comprehensive list of changes below:

Any player can create a Clan, provided they have reached Level 13 and have 250 Gems on their account. From there on, they can leave the Clan open, meaning that anyone can join after finding it in the Clan search or make an Invite-Only Clan, which is only available via invitations or applications.

The maximum number of people in the Clan is 30. Clan name and Clan Tag are chosen by the Leader during Clan creation and can later be changed. The cost is a 100 Gems each.

Currently, these features are available for Clans:

Clan Boss is a special Dungeon that is only available to players who are part of a Clan. The Boss of this Dungeon has a massive pool of Health Points, and needs to be brought down by the united efforts of the entire Clan. Whether or not that happens, the Dungeon will be reset at 10:00 UTC each day.

There are 5 Difficulties available, each one must be consecutively unlocked by completing the previous Difficulty. These will remain available to all Clan members and will not be locked again after the Dungeon is reset.

A special type of resource, the Clan Boss Key, will be required to enter this Dungeon. Once used, it will be refreshed in 6 hours or needs to be purchased with Gems in the Shop (Gem Shop tab).

The Demon Lord cannot be defeated by one player in a single battle. Instead, the damage each Player’s Champions have inflicted will count towards the Demon Lord’s overall HP, gradually chipping it down as more and more Clan Members join the fray. In the end, rewards will be given out based on the amount of damage dealt by individual players.

As the name suggests, this is an indicator of a player’s Activity in the game and the Clan. First, every member of the Clan has to Check In via the Members tab once they log in. There will be an indicator highlighting the tab after each daily reset (10:00 UTC) to remind players of this requirement. This action will earn the player 1 Star.

To earn the second Star, players must:

To earn the third Star, players must:

The game will add Activity Stars earned by individual players to the Clan total 15 minutes after they have been earned. Once the Clan reaches 90 Stars, all Clan members get a Clan Chest with a randomized reward. The Reward Chest must be claimed manually before a new Reward Chest is provided, otherwise, it will be lost.

There are a number of challenges that the Clan can beat with joint efforts, each will provide a boost to the Clan’s Ranking Points.

Clan Ranking indicates the power of the Clan and their success in tackling different game challenges. Obtaining Clan Achievements earn your Clan Points. These can be viewed in the Rankings tab.

The Clan’s Position in the Rankings is determined primarily by the Clan Points and a measure of the overall Clan Power.

Please note that this is just the first iteration of the Clan feature in the game. As it stands, many other important additions and improvements are in development. Clan Chat is our next top priority.

Achievements are a new type of player-specific Special Quests that is now available. Unlike Daily, Weekly, and Monthly Quests these Achievements do not have a set timer to complete and will not reset upon completion.

Achievements will vary in the rewards they provide and can be claimed from the Quests tab as soon as conditions have been met.

Two new Artifact Sets (4) have been added to the game!

These Sets will be available in the reward Chests that can be looted from the Clan Boss Dungeon.

Now the time has come to roll some new small additions out and give our players new challenges and new ways of strengthening their Champions. You can find a comprehensive list of changes below:

Champion Rating. This new feature allows you to score your Champions on their performance in different areas as well as learn how other players use these Champions.

You can score the Champions you currently have in your Collection on their performance in several categories:

The average value of all the players’ scores for each Champion will be shown so other warriors could learn this Champion better. 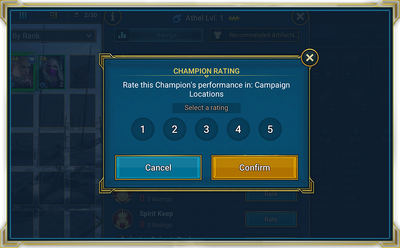 Potion Mixing. That is what we've been wanting for a long time! Finally, you can fuse several Lesser Potions into Greater Potions, and several Greater potions into Superior ones. 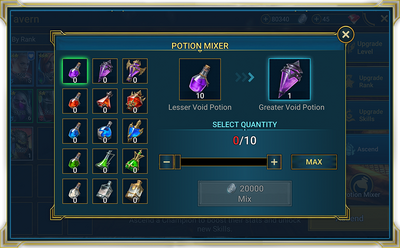 As mentioned in the patch notes for Update 0.11, we had to delay a couple of features in order to test them properly. Now the time has come to roll these new awesome additions out and give our players new challenges and new ways of strengthening their Champions. You can find a comprehensive list of changes below:

This new progression system offers you three Mastery Trees, each providing unique bonuses that will be applied to the individual Champion. That is right, you can have two duplicate Champions with completely different Mastery set-ups. In turn, this will allow you to specialize them for different purposes.

The following trees are available:

A single Champion can only have Masteries from two Trees at once. In addition, Mastery slots can only be unlocked if they are adjacent to one another, so choose wisely! Take some time to tap on all slots, check out the bonuses, and plan your own unique build.

If you want to test another Masteries build you can Reset a Champion’s Mastery Trees. This can be done for free the first time to allow players some room to experiment, after that you can Reset them again for Gems.

No Telerian scholar can claim with absolute certainty what dark rituals or tragedy led to Queen Myra giving birth to a twisted monstrosity that is the Minotaur. But what the legends of old do agree upon, is that she had her offspring imprisoned in the deepest dungeons beneath the palace. There he dwells still, waiting for Champions brave or foolish enough to face him in battle.

This new Dungeon follows a more traditional scheme with 3 Rounds overall, two standard rounds and a Boss at the end. Challenge the savage Myrotaur and gain Mastery Scrolls to upgrade your Champions! Make certain to examine the Minotaur's Skills and choose your strategy wisely, it will not be a simple battle.

We have adjusted the rewards that players get for winning Battles in different Tiers of the Arena! Check out the table below to know exactly what you can expect.

As a result, prices for Great Hall upgrades have been increased as well.

The following changes have been made to the Special (Daily, Weekly, Monthly) Quests:

To keep the playing field as even as possible, we’ve decided to buff three of the Champions that players can choose at the start of the game: Galek, Elhain, Kael. The purpose of this is to make them as viable a choice later in the game as Athel.

The Champion that players receive for their first 7 consecutive days in the game has been changed. Instead of Erinyes, they will now have the orcish Emissary join their Collection! This Support Champion buffs and revives her allies, and is certain to be a powerful addition to any Warrior’s team!

Tired of seeing Mystery Shards drop from your hard-earned Dungeon rewards? We have taken note of player feedback on this matter and rebalanced the loot tables. Mystery Shards now have a significantly lower drop rate, Artifacts have a higher drop rate and are by far the main reward you’ll be seeing from now on. Oh, and your Champions can drink to that too - since there is now a small change to get a random XP Brew as well. 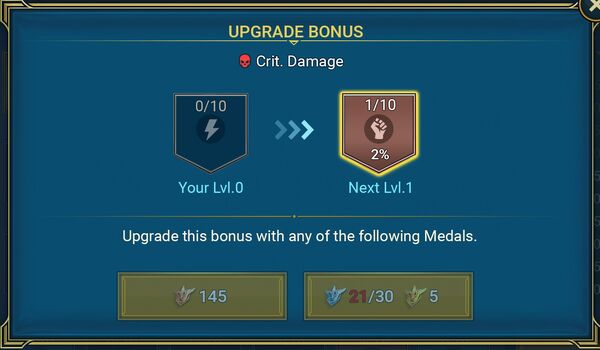 The first months of the game demonstrated that as players progress through Arena Tiers, they are often left with a significant number of Arena Medals of a lower Tier (Bronze, being an immediate and current example). As of this update, Great Hall upgrades can be unlocked and improved by combining the medals of different value.

This is entirely optional but removes the issue of leftover Medals that many have accumulated.

Amulets and Banners now require the Champion to have a respective level of Ascension - Rank 5 for the Amulet and Rank 6 for the Banner. Champions that do not fit the criteria, but had these Accessories equipped prior to the change will retain them. However, should you wish to swap either for a new one, make certain to Ascend the Champion appropriately.

As before, we continue tweaking different Champions based on player feedback and analysis. Take a look at the table below to a comprehensive list of these changes:

Additionally, we have adjusted the maximum Ascended Stats for the following Champions.

Note: These changes do not affect Base Stats of the Champions, this covers the Ascended Stats at Rank 6. 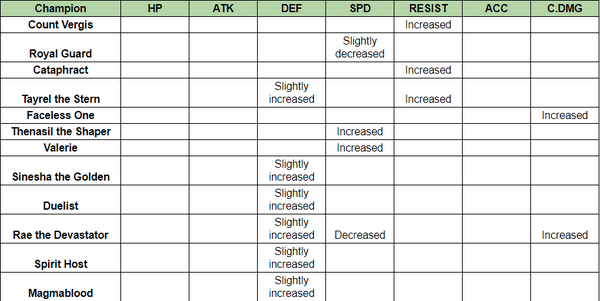 Note: Don't worry - we will backdate the Rewards from last week's Arena Rankings. Nobody will miss out.

We have introduced a balance patch today. The changes are covered at length in the notes below, as well as the reasons for those changes.